Since it's International Babywearing Week, I thought I'd blog about the adventures of babywearing at our house!

"Babywearing" simply means holding or carrying a baby or young child using a cloth baby carrier. Holding babies is natural and universal; baby carriers make it easier and more comfortable, allowing parents and caregivers to hold or carry their children while attending to the daily tasks of living.

Babywearing helps a new dad put a fussy newborn to sleep. It allows a new mom use both hands to make a sandwich. It lets an experienced parent or caregiver carry a baby on her back and wash the dishes, do the laundry, take a hike, or weed the garden, all while keeping the baby safe and content.

Babywearing was something I knew I would do years before I actually became a parent. I had several friends with ring slings, and I thought they were fantastic! So while most of the other parents on 1st trimester pregnancy forums were chatting about the cutest little outfits they saw at the mall, I was busy looking at slings, wraps, and soft structured carriers.

I was totally excited when I went to Diaper Lab (Somerville, MA) and discovered that in addition to cloth diapers, they also sold several types of baby carriers. And of course I was even more excited when they were offering a babywearing workshop where I could drag my husband to go learn about babywearing safety and have someone demo the various types of carriers.

Being a soon-to-be-parent living life from a wheelchair, due to neuromuscular disease (Mitochondrial Myopathy) sort of complicated things.  As I began researching, I decided the important things I needed in a carrier were:
I also found the Boston Babywearers group and went to a meeting while 7 months pregnant since I wanted to try some carriers to see how they felt before I was "TOO big" to get a good feel of what it would be like.

Wraps: I figured out quickly watching at Boston Babywearers & Diaper Lab's workshop that a wrap would not be ideal to put on in a wheelchair. It's essentially a long piece of fabric that you can tie around yourself to hold the baby. Moby Wraps are a popular brand - but watching a demo of how to put it on, seemed way too tricky for me to attempt with a newborn in a wheelchair!

Mei-Tai: While pregnant, I thought the Mei Tai would be awesome. A friend gave me her pink BabyHawk since she had a boy the 2nd time. I did use it several times, from my manual wheelchair when Sophie was a newborn, but found tying it to be difficult from a high-back power wheelchair. I do plan to try it again now that she's 15 months, to see if I can get the hang of it, since she can sit up independently - unlike how it was at 2 months when I tried. Also, the ties got "lumpy" behind my back.

Ring Sling: I knew this was the must-have,as they are easy to get on/off, are great for a wide age-range, and breastfeeding was easy in this position.


Pouch Sling: I loved these too, but because I ended up with severe generalized edema while pregnant,  I decided against getting one since my size would change as the fluid distribution shifted. I didn't want to buy one only for it not to fit me later. Plus the way you wear it looked a bit limiting from a manual wheelchair when I needed 2 hands - a ring sling was a bit more adjustable.

Soft Structured Carrier: I'd heard many pro's & cons about these - carriers like Bjorn, Snuggli and Infantino (aka in the babywearing community as “crotch-danglers”) tend to give all soft structured carriers a bad reputation because of the unnatural positions they put babies into which can be stressful on a baby’s developing hips and spine. While they might be "safe" for an occasional walk around the mall or a trip to the grocery store, these are far from ideal when babywearing for hours - much like how it's not good to leave a baby in an exersaucer or jumperoo for extended periods of time. but unlike these toys where the baby's feet can touch the ground, a baby "hanging" in a soft structured carrier for hours just has his or her legs dangling. Of course it's slightly different in the case of a parent in a wheelchair who would wear the baby sitting instead of standing, but to avoid these issues, I almost overlooked this category of carriers altogether... must after much research, I decided to give them a try - I'll explain later.


My first baby carrier was a Sakura Bloom Linen Ring Sling - which I got for about $88 at Diaper Lab. I had it packed into my hospital birth bag so that I could start using it the day Sophie was born! And yes, she was less then 24 hours old (or new?) when I first put her in. She was cozy and happy right from the start. Here she is 2 days old... is it me, or is that a smile I see in the photo on the left? :) 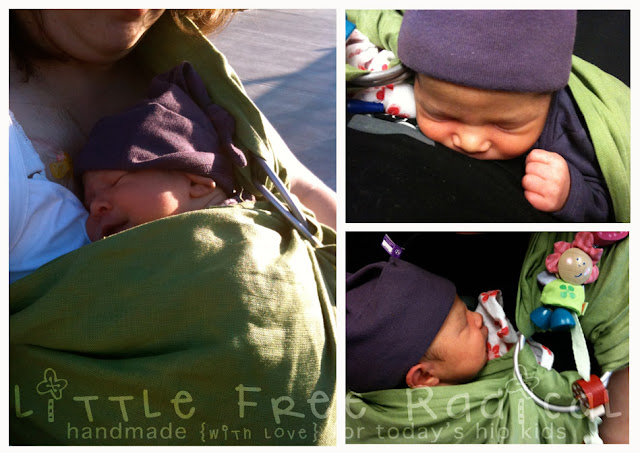 I loved my ring sling in the early months! As a newborn, Sophie and I went everywhere with it. Of course people see a parent in a wheelchair and all have to point & stare... I must have been asked a good dozen times, "is that a real baby in there?" (like what, did they expect me to be rolling around with a doll? um, no)! Of course once I clarify that yes, Sophie is a real baby, people want to know "where I got her."  - but I'll save the questions I get asked as a parent in a wheelchair for an entirely separate blog. :)

Babywearing with Central Line Access: The only thing I wasn't thrilled with was the baby's head being so close to my accessed port. If you look closely in the photos you'll see the yellow port needle, where it's accessing the port implanted in my chest (for IV infusions). I always had to adjust the sling low enough early on so her head wouldn't be resting on the hard plastic and hurt her or me. I ended up with sepsis when she was about 2 months old and ended up losing that port - so I had them replace it with a tunneled central venous catheter instead - not soley for babywearing reasons of course, but it seemed the best option after meeting with Infectious Disease, my infusion company and doctors. I found this type of line to be much more comfortable for both of us while babywearing. It's softer and doesn't hurt as much having a head against my chest all day.

Babywearing a High-Tone Baby: I did find the ring sling easy to use from a manual wheelchair with a newborn. However, Sophie has hypertonia (high muscle tone), so it did get tricky at some points trying to find a position comfortable for both of us. By around 4 months, she decided it would be wicked awesome to spend her days like a jack-in-the-box. I put her in the sling asleep so we could go out, and suddenly she'd wake up and pop up to see what was going on in the world. I'd have a hard time repositioning her in a way that she would stay. She would stand all day and play at home by 5 months - but was unable to stay sitting unassisted til she was 7 months due to her muscle tone. Having a "stiff kid" can be a bit tricky in a sling. It was at this point where I decided to re-think the idea of a soft-structured carrier. 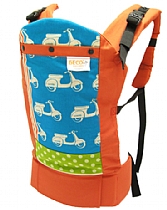 I did my research again about carriers, visited Boston Babywearers again to try products with Sophie this time, and was torn between the Oh Snap! BabyHawk and the Beco Butterfly 2 - but finally decided on the BB2 as seemed to be more comfortable for me personally - of course "comfort" may vary depending on people's sizes & shapes.

I loved the Limited Edition Echino Scooter Beco and ordered it from Pax Baby for $205 in October. It was supposed to arrive mid-October, but sadly it took til mid-December for it to arrive since she was importing it from overseas. So, October-December were very long months waiting to test it out. It was worth the wait though!

Sophie loved it right away! Once again, I could take her out all day and she was happy. It was comfortable for me too. I have low muscle tone & poor "trunk control" due to neuromuscular disease but we had a great first 6 months with it! 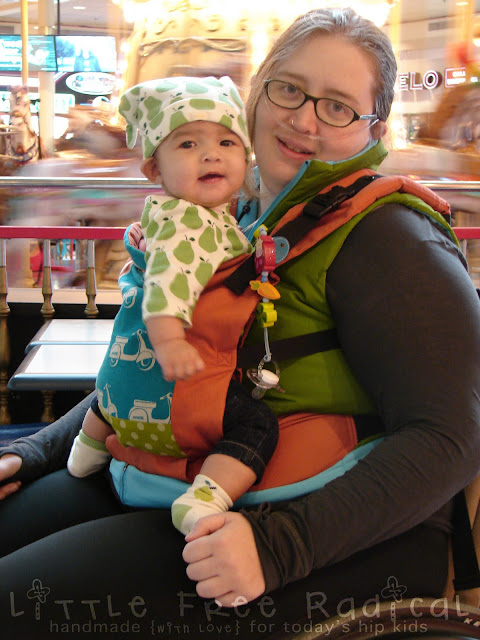 But around her birthday, it started to get a bit trickier for me to carry her - She decided it was fun to "stand" in it all day, and as she was getting taller, her face would be in my way. I'd be trying to roll down the sidewalk, but Sophie kept standing trying to look me in the eye. If I moved my head to see where I was going, she'd follow me - she thought it was the best game ever!

Then she started finding new games including:

Plus all this standing/jumping on my lap all day was putting a lot of pressure on my back and shoulders. That's when I decided to re-think the front facing carrier issue. Babies can get overstimulated easily in a front-facing carrier which is one reason NOT to (in addition to the fact that most front-facing carriers are also the crotch-danglers I described earlier). But Sophie was now over a year old. I thought it seemed to be an okay time to let her sit front facing on my lap. 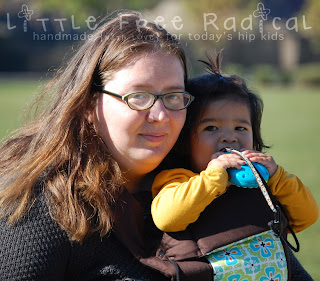 I looked at several carriers - checked weight ranges, hip support, and other factors before deciding to go with another Beco - the Gemini!  It had the option for the baby to face in either direction. It was also easy for me to turn Sophie between front & rear facing without having to take her completely out - something I wanted - in case she fell asleep or if I wanted to talk to her.

As soon as the Gemini arrived, we took it out for a test-drive around the neighborhood. Sophie had a blast  "flying" (yes, with her arms straight out) on mom's lap! It was a whole new view of the world for her! She's happy & content and isn't jumping on me all day - I love it, she loves it!

I'm hoping to get at least another 6 months of use out of the Gemini. I've also been using the Sakura Bloom Ring Sling again. It got a bit easier as Sophie got older to position her in it and I've found a few of fantastic positions over the summer that can be done in a wheelchair!!!

We are going to Boston Babywearer's group on Wednesday to look for "Toddler Tricks" from other moms and of course to celebrate International Babywearing Week! But this summarizes my experiences with my first 15 months of babywearing as a parent living an active life from a wheelchair.


NOTE: If you're pregnant or a parent in a wheelchair, feel free to comment or contact me if you're shopping around looking for carriers and baby gear! I'd be more then happy to give you more details on what worked - and what didn't work from my experiences. :) 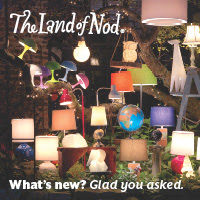 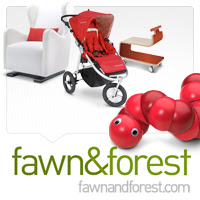 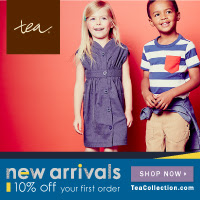