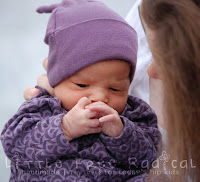 I'll never forget the morning when Sophie was 5 weeks old that I went to dress her in her Zutano Itzy-Bitzy outfit we took her home from the hospital in... It fit just 5 days before, I washed it (of course) and panicked thinking, "oh no! her clothes shrunk in the laundry!" Well, the clothes didn't shrink - Sophie had grown out of her first newborn outfit. Already!!!
That was the day where I immediately realized I'd have a 1st birthday party to plan...  so I got started that very afternoon by buying fabric to make her a birthday dress!

Over the next few months I started poking around at party supplies. Everything had such a "theme" to it in stores, but after looking through hundreds of "themes" and not loving any of them, I finally decided to start from scratch and come up with my own decor and scheme. :)

Her birthday is July 1st so we were having a holiday weekend (Independence Day) party so instead of doing red, white & blue, I went with a red, pink & turquoise as the primary color scheme! 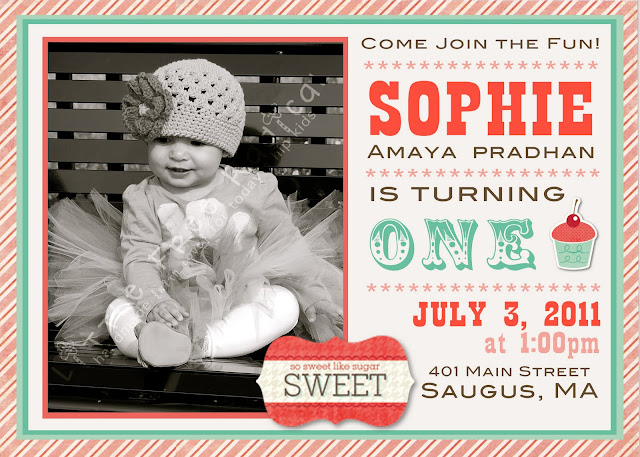 We had over 4 dozen people coming to the party, and since we live in a small apartment we decided to rent a function hall so we'd have enough space! We also hired Allison from Twice As Nice Photography to come do photos since I knew we'd be too busy to, and I'd regret it later!
So while we were inside setting up, Allison took Sophie outside for some birthday photos with her little friend, Anvi: 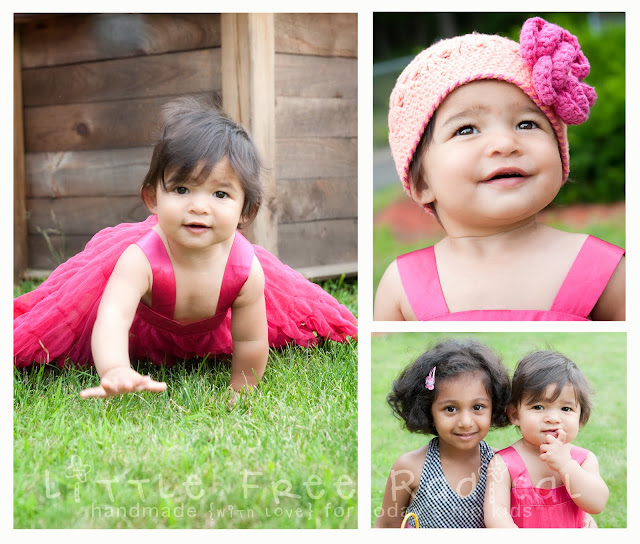 Since we had so many guests coming, I decided to skip the goodie bags, and do a candy buffet instead! Then I purchased some paper goodie bags from sweetestelle on etsy so that guests could pack up their own bags! 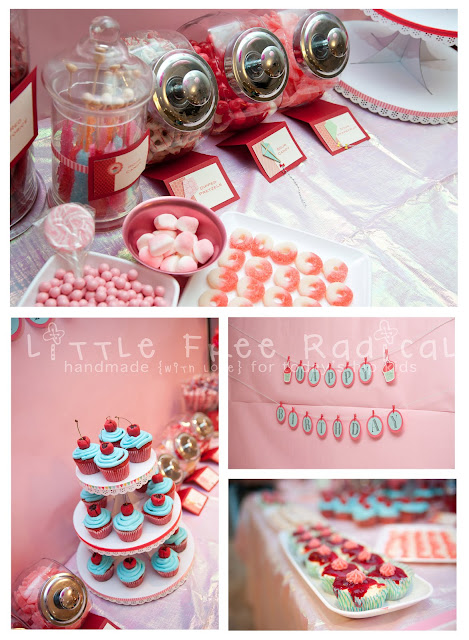 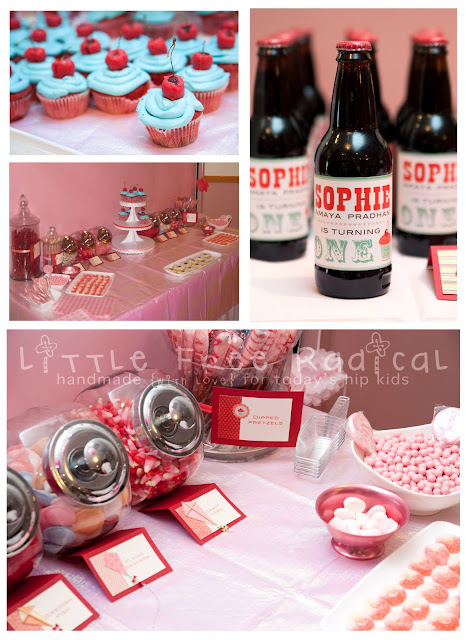 I found great classic candy jars at Target and found some unique ones at Home Goods to add different shapes to the table and hunted down candy in pink and red all over.                                                                  I also found a great blog with instructions for  DIY: Chocolate Dipped Pretzels and made 100 pretzels for $20! With the leftover melted candies, I drizzled them onto white chocolate covered pretzels to add some festive color!
For the beverages, I made labels to wrap around the bottles of soda and water that matched the invitations, then printed those at Staples as well! Then cut them and taped them over the existing labels!
Another tricky thing was trying to come up with party favors for 20 kids - ranging in age from toddler to 14 years old, including a few with special needs! After going to several party supply stores and seeing mostly "junk" that a parent would throw out after 2 weeks or
that would wind up in next years yard sale, I decided to make my own birthday hats out of brightly colored fabrics (prints are by Riley Blake Designs) and then make pinwheels & cloth balls.
For the pinwheels, I bought Martha Stewart's pinwheel kits but disliked the patterns in them, so I bought 6x6 pads of paper - Lime Twist by My Minds Eye - and cut new pinwheels!
I have an etsy shop - littlefreeradical where I sell cloth toys I make. So making the balls was easy since I do it all the time! The toddlers had fun with them, as did the 10 & 11 year olds!
So, I'll be adding more party packages in my etsy shop soon for birthday hats and cloth balls! (I already offer packages for tutu's as party favors!) 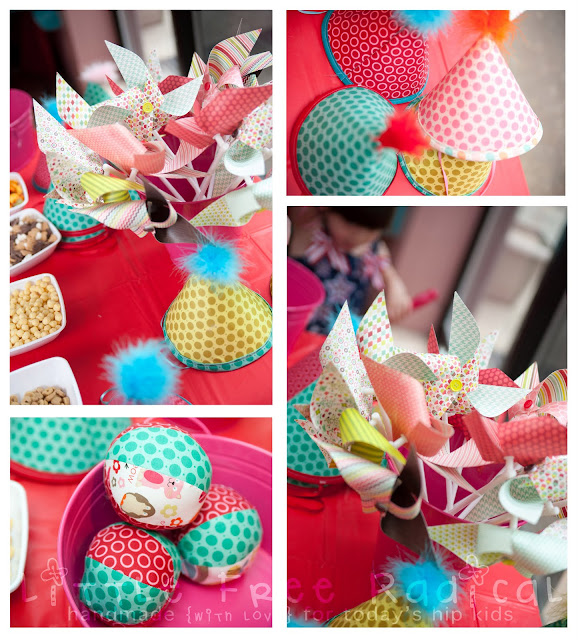 Of course if you have a party with a lot of people, you must have a lot of food!

I also made an easy banner out of a 6x6 pad of paper - Lime Twist by My Minds Eye.
I just cut the paper into triangles, holepunched the corners, and strung it on twine!
Best of all, It only cost me about $6 to make!

Sometimes, turning 1 can be a bit confusing.  Like, when someone hands you your very first cupcake, then 50 people are standing around watching you figure out what to do with it... 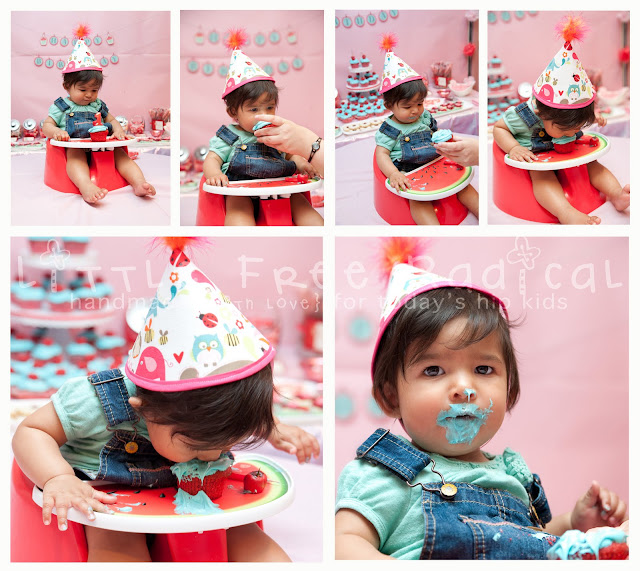 But one of the most important things in life, is having a friend that you can count on,
who will let you know when you have something on your face: 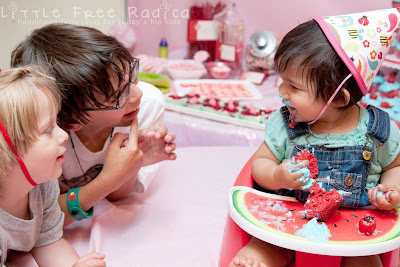 And of course, by the end of planning for this party, I was full of D.I.Y. ideas for her 2nd birthday party! Next time, I hope to have the decorations & party favors done weeks in advance so that I can save the days before to prepare the food! I'd love to do as much home-made next year as possible and the cost will be much cheaper now that I have party ware & serving dishes that I can use year after year!
Happy 1st Birthday, Sophie!

Photo Credits: Allison LeBlanc from Twice as Nice Photography
Posted by Little Free Radical at 1:40 AM